“Today You Are My Brother!”

A few weeks ago, amidst the chaos of natural disasters and senseless shootings, I arrived in Omaha to serve the Iowa-Nebraska-South Dakota Conferences of the United Church of Christ as an associate conference minister. As I was getting settled, I made an appointment with a primary care doctor in the area. As is routine, the doctor performed a checkup and encouraged me to do some additional vitals to create a baseline in my new medical record.

When I went to do my bloodwork, the gentleman who prepared to assist me began our engagement with normal pleasantries. Then he suddenly asked, “What is your faith?” The question caught me off guard. For a moment, I wondered if faith statements were a requirement for blood draws in the Midwest.

I answered, “I am a Christian!”

The gentleman continued to prepare my arm for the blood draw and followed with another question. “What kind of Christian are you?”

I admittedly had no idea exactly what he was asking but attempted to answer. I explained that I am a progressive Christian who belongs to an overall liberal denomination. He followed up by asking me the name of this denomination and I shared a little about the United Church of Christ.

He paused and then replied, “So is the progressive church the one that says certain people aren’t allowed, and not everyone can come?”

I realized that there had been a misunderstanding. I attempted to explain again the United Church of Christ, our commitment to extravagant welcome and a still speaking God.

“This must be a very small church, I have never heard of a church like the one you are describing,” he said.

I explained that we have over 5,000 churches throughout the country and about 300 in the Iowa-Nebraska-South Dakota Conferences. His eyes widened at the reality of this information.

As we walked into the hallway he grabbed my hand and said, “I am a Muslim!” Holding his hand, I looked into his eyes, expressed condolences for the senseless violence in New Zealand and shared with him the outreach our conferences provided to the Muslim community the previous week. I also assured him that he would be welcome in our congregations just as he was. 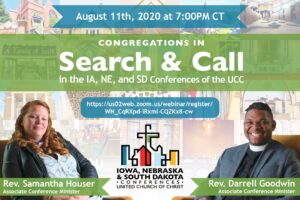 During this challenging and uncertain time, we acknowledge that many of our churches are still participating in the search and call process. Rev. Darrell Goodwin and Rev. Samantha Houser who steward the search and call[...]
View Calendar
Add